One of the first things you notice when setting foot on Chinese soil for the first time is the incredible hospitality that you will be shown from the word go. Actually in reality, the word ‘hospitable’ is somewhat misplaced in the case of Chinese folk. For sure people will be welcoming and friendly; from a passer-by to a shop assistant to a taxi driver, you can chat to virtually anyone you meet. Even if it’s with the arduous help of a dictionary or guidebook people will generally have the time to try and communicate with a smile and enthusiasm. 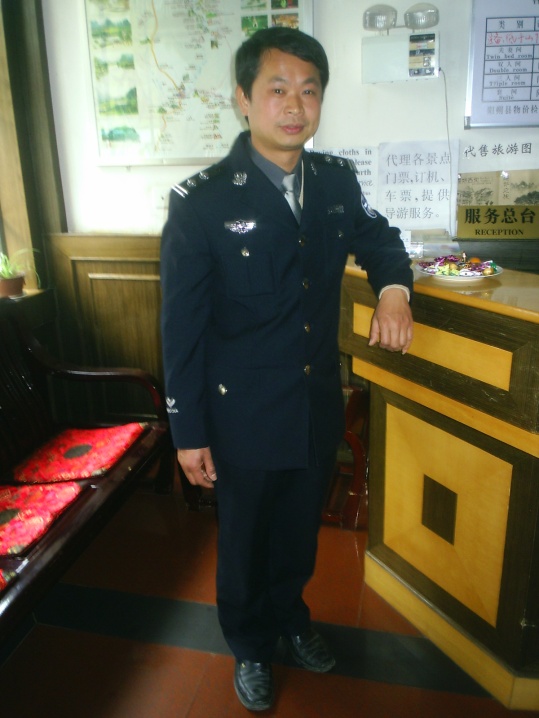 Andy and Vivian Ling at the end of the street

Down at my fave restaurant

What I mean by this is that if you’re ever in need of assistance, be mindful that the same hospitality can swiftly move to another level of generosity and charity that we are not accustomed to. I remember one time in Beijing asking someone where the number 355 bus stop was. The gentleman looked at his watch then signalled me to follow. With no choice, the guy took me on a brisk ten minute walk to where I needed to go, then insisted on waiting until the bus arrived and I was on board. As the bus pulled off, I could see him literally running at top speed back to where we met; I assume he was by this time late for whatever appointment he had.

If you are new to China and have just moved into a new apartment, the landlady or agent will always be on call if you need any help. They may even find someone who can speak your language and give you their number. On another occasion I asked my English speaking contact if they could get someone to fix my fridge. Apart from having a nauseous and stubborn odour that could stop an elephant in its tracks at fifty yards, it also had some annoying humming noise that would go on relentlessly twenty four hours a day. It would get louder and louder for about two minutes and then switch itself off abruptly with an accompanying shudder followed by a ticking sound. After a minute or so the humming would quietly return and then proceed to go through its cycle once again. For almost two weeks it had become a singular point of focus and personal obsession in my life that was driving me to insanity. I freely confess that things had gotten so bad I had even started to mimic its weird noise pattern.

The ‘xu ligong’ (repairman) couldn’t understand what he’d been asked to do. After all, the fridge itself was working fine. So it had a bit of a strange noise, so what?  The agent too didn’t really grasp what the problem was, though he finally succumbed to my request to find a replacement. The following Saturday he, his wife, a translator and two friends all showed up in a van to get me a new fridge. Feeling really self conscious that to them I was creating a lot of fuss over nothing, we spent the whole afternoon going around looking for a new one. For some reason they wouldn’t settle on buying any old fridge and we shopped around from store to store, even going to several different shopping areas until finally the job had been done. At certain points during the day, time seemed to drag painfully on and on while my cortège would all rattle on simultaneously over the details of fridge after fridge with yet another shop assistant. That night I slept like a log, not only because the apartment was now blissfully quiet, but the whole episode had left me completely and utterly exhausted.

This is how it goes in China when you want to get something done. Just be aware that the smallest of requests can spiral out of control within an instant. Most of the time it will be because someone is suddenly bending over backwards trying to help you out and then some.

So there I am in Jenny Lou’s; the supermarket that sells foreign food in order to get my usual bulk buy of wholemeal unsliced bread. There are no brown paper bags for the bread so in my now much improved Mandarin, I ask one of the shop assistants if they have any more. The assistant then goes and gets someone else to help and it all goes down hill from there on. Looking puzzled they both go over to the bread section and start rifling around under the shelves looking for more bags. One of them stands up and offers me a narrow bag that’s used for the French sticks. I point out that I want to buy some of the large loaves, explaining that the bread won’t fit in the one he has. The other guy uses a two way radio and he talks another colleague who appears two minutes later with a small plastic bag that just about accommodates one single loaf. I tell them that I need five more bags as I need to buy five more loaves. Now totally baffled they radio the store manager who appears and calls out to a girl from behind the counter who runs over bringing some more bags.

I am now surrounded by five people blocking the narrow aisle all completely animated as a huge Russian sounding guy in a long black coat gets off his phone and attempts to come past. By this time as the manager barks out orders, one member of staff is now holding open the clear plastic door covering the bread and another holds a bag open ready for me while I remove each loaf. They are all being massively over helpful creating a huge commotion over six loaves of bread. From behind I hear a huge exasperated ‘tut’ from the guy in the black coat who is still unable to get by. I am also sure he can’t believe that a single person is unable to take out a loaf of bread and put it into a bag by himself. By the time I have the six loaves bagged up and in the trolley/cart my poor brain has taken another unnecessary pounding with Chinese hospitality taken to its usual extremes.

Fair play, it does have its endearing edge about it. I was on holiday in Xiamen a few years back, a seaside town down in the south of China. There were no mugs in the hotel room, only two small paper cups; hardly adequate in satisfying my morning craving for a good strong cup of English tea. Picking up the phone, I asked room service if they could bring a couple of mugs up though they maintained that unfortunately there were none to be found anywhere in the hotel.  Even so, a few minutes later though, there was a loud knock at the door. There stood one of the staff with a big beaming smile on his face. He was carrying a tray with eight more tiny paper cups arranged in a circle in order to make up for things. There are moments when you really reminded as to why you live in China, and that was surely one of them.

This artist invited me into his gallery and spent two hours showing me Chinese calligraphy starting with my name.

I met Xiaoguang Yu (2nd left) on top of Ben Nevis one day (as you do). We kept in touch and then finally met up again in Beijing. 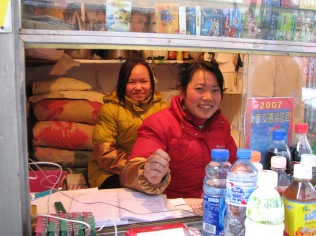 At the corner shop on the way to work every day

On the way up Emei Shan Mountain in the Sichuan Province

Mama Naxi is famous for her OTT hospitality in Lijiang