In June, now going up the wall for something interesting to do or for going somewhere, I hit the road again to the city of Nantong in the Jiangsu province. This time I choose to fly, though these days I do wonder about the safety of using local flights around China. For the umpteenth time this year and with a double blast of deja-vu the flight is delayed once again and we are told that the “plane’s breaks are not working.” As a ripple of worry spreads through the passengers to be, I am sure that this was just a little bit too much information for us. I mean how do they know that they will work until we are landing? Hmmmmm….Ahh Chinese domestic flights never fail to put the wind up you.

Nantong is pretty close to Shanghai and the opposite vibe to that ‘out there’ feeling of Jilin. Set on the Yangtze River, it’s a sleepy but very pleasant place. Here you can see 24 hours a day shipping going up and down the river in huge numbers. It’s quite an amazing thing to see. From the temple at the top Lang Shan (Wolf Mountain) it’s quite breathtaking. I guess the Yangtze is one huge artery for China as from west to east it spans the entire breadth of this vast country. 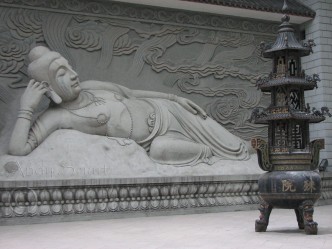 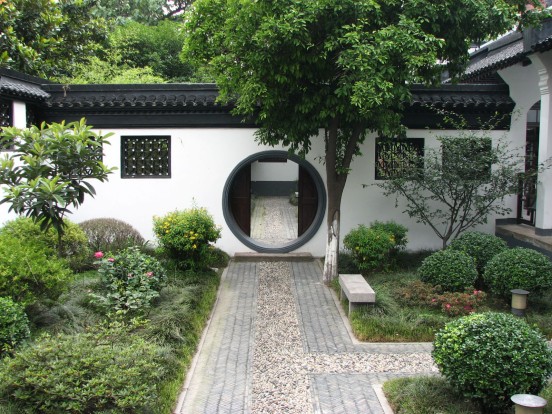 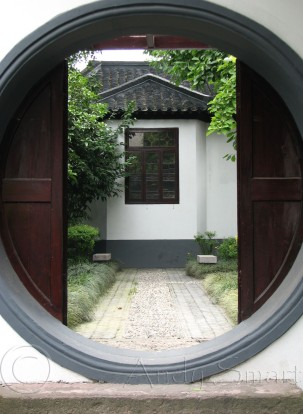 As I’m walking alongside the river the sky goes unnervingly black. The wind suddenly dies and the atmosphere transforms into complete stillness while the level of humidity noticeably rises. Within minutes the very beginning of a two day typhoon hits. This area is the northern most part of Typhoon Alley after all and basically a corridor between China’s East Coast and Taiwan stretching up to Japan. Typhoon season is normally between May and late autumn. If you live in this area you may well experience over twenty five typhoons in one year. In 2009 there were thirty nine typhoons that moved in and out of the zone.

The weather descends so fast that the only cover I can get to in time are some table umbrellas and benches next to a small hut selling ice cream. The storm is so immediately fierce that all myself and a number of others can do is huddle together under one umbrella with the canopy down as low as it can go. Clutching each other and attempting to weigh down the benches, I am sure we are all wondering if we’re going over the side and into the river. For well over the longest hour of my life we watch in fear and people scream as the remaining benches and umbrellas all get blown away and swept off the pier. It is as if everything in the area is being sucked up by some giant vacuum cleaner from above. On top of that, the rain is more than fierce and to say it’s hammering down is the absolute understatement of the decade. It’s even coming upwards vertically, the force of the downpour is so strong. All the while the water level around us rises like some giant warm water carpet around our thighs before cascading  into the Yangtze. As the water rushes past, we are continually battered by the rubbish and detritus that is carried by the tremendous current.

To cap it all, we were about 100 yards from the Riverside Tower. This basically is a giant 50-foot metal spike and attracts every lighting bolt in the area to come down ear splittingly close right next to us like some air strike. Who on earth dreamt this one up? No one who lives here that’s for sure! I seem to remember someone told me sometime ago that hiding under an umbrella is not really top of the pops when it comes to thunder and lighting. As each bolt comes down with a simultaneous ear splitting crack, that tiny bit of common sense is ever present and I wonder if the next one will barbecue us all.

The scene after is immediate devastation; the fun fair down the road is completely destroyed and I can only think that this happens all the time here. Taking full advantage of a brief lull, I get back to the hotel sharpish passing scenes of carnage along the way.

The Riverside Tower – A lightning magnet in Typhoon Alley. After the storm