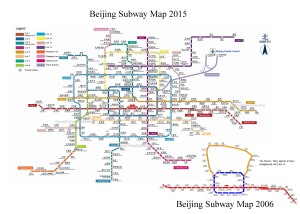 To accommodate the rapid growth of Beijing and in a bid to reduce the number of cars, the subway system is also expanding. A good friend Wang Chun Guang who is a professor at the University of Mining and Technology has invited me down to see the latest work being done on line 10. This is one of the new subway lines which will mean that a lot of the really congested stations can thankfully be avoided in the future.

I have to say that the whole thing is pretty exciting. I mean going underground is a buzz any day of the week let alone under China’s capital city. As we drive to the building site we start chatting in more detail about the afternoon ahead.

“You are about to see the largest tunnelling machine in the world” says Chun Guang proudly as he hands over a white protective hard-hat over and ID badge.
“You must stay with me at all times because we are going into a restricted area. Also we don’t want you to get lost when you are down there” he adds with a chuckle.

The site itself covers a wide area, with pipes and all sorts being laid down into the ground via a giant crane spanning between two rail tracks. Finally we reach the pit where the drilling is being done and can look down at the Tunnel Boring Machine (TBM) some sixty or seventy feet below. The smell of welding, earth and cement hang heavily in the air.
“Don’t worry about anything. This is a skilled team who have been working together for years” assures Chun Guang already starting to descend down the metal stairwell. “You are quite safe.” 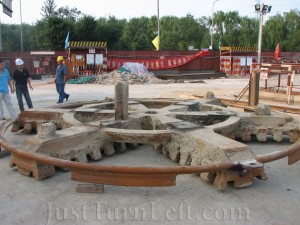 One of the spent cutting heads

Quite amazing being down here, though the TBM isn’t working today. Instead a crew of ten guys are installing a new drill head which is basically a huge circular set of metal teeth.

“The machine weighs seventy tons and costs 4 million RMB” he manages to shout over the noise. “The problem is that Beijing is so dry that the soil is very hard. There are also lots of rocks and pebbles. Each cutting head will last about nine months and it takes one month to replace.”

On the way out we stand next to a large picture of what the station will look like when it is finished and my friend rounds the day off.
“If you’re lucky enough to have a subway station built near your apartment then it’s like winning the lottery. It will instantly double in value. Any new apartment block around here was sold even before it was built. Some companies will know where the lines will be built years before anyone else and buy the rights to build on the land in advance.” 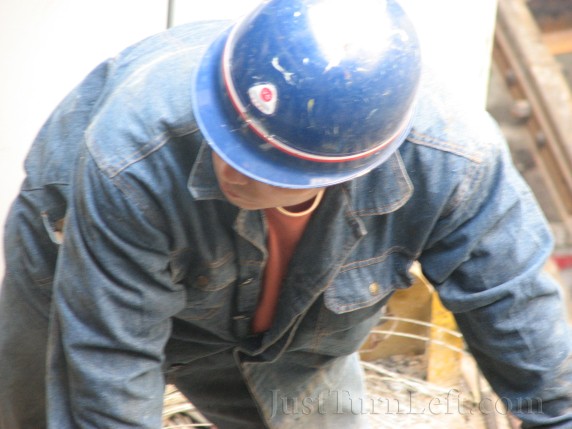