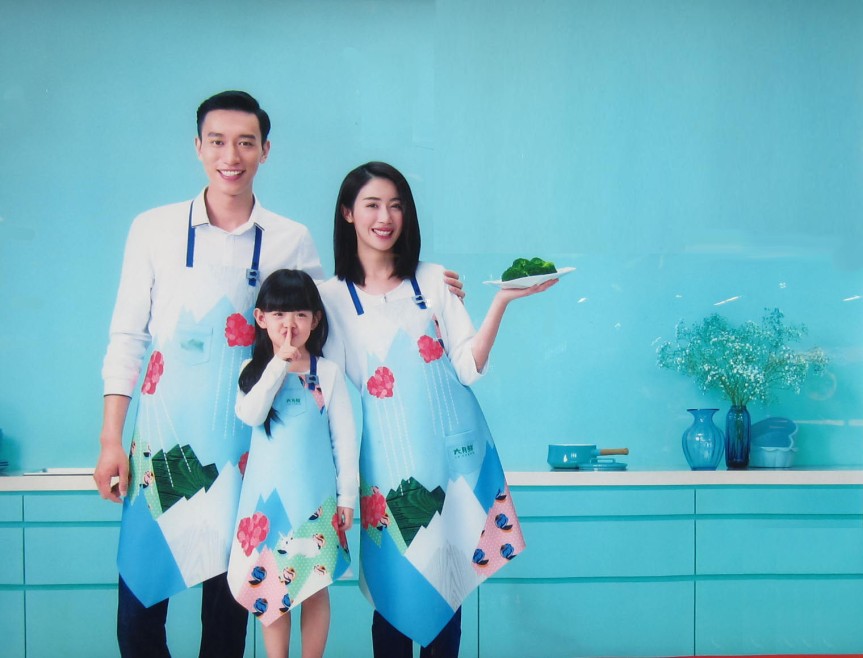 Happy Families: Images reinforcing early age marriage are everywhere in China. This poster was an ad for cooking oil on the subway.

Names have been changed in this article and dialogue has been translated into English.

A recent advert by the cosmetics company SK-II telling the story of China’s ‘sheng nu’ or ‘leftover women’ has created a viral storm. ‘Sheng nu, a phrase from State-run media in 2007, refers to woman in their late twenties who are unable to get married.

Still image from the SK-II advert (link below)

Since the birth of the phrase there has been an ever increasing stigma for those who are unable to tie the knot, the term ‘leftover’ conjuring images of unwanted table scraps.

In China, the family is the most important thing in anyone’s life so the pressure to get married is a continual burden that gets heavier as time ticks by for a single woman. Your children will be the ones to take care of you when you are older after all. Grandparents normally live with the family and look after the kids while mum and dad are at work.

As one of my friends Zhang Fu pointed out, failure to get married is a stain on the family reputation.

“Most Chinese women feel really guilty and depressed about having no husband. They don’t want to meet others and they feel ashamed when they come back home especially during Spring Festival. They feel like that is their fault and they are sorry to everybody. People think you should get married no matter how bad their relationship or life is.”

Here are a few facts about China we need to get sorted before we move on:

Zhi Li is twenty four years and old and is still not married. By Western standards it may seem somewhat strange to use the word ‘still’ at such an early age but this is just the way things have been in China since ancient times.

Though only in her early twenties, Zhi Li comes across with the confidence of a professional who has made up her mind what she wants. She has a degree in accounting from the Capital Normal University and is one of the many educated woman now termed as ‘Nu Qiang Ren’ or ‘Power Women’. These are the professional woman who have made a conscious decision not to get married.

Whereas those who consider themselves ‘sheng nu’ will rarely want to reveal their inner sadness to the world, in contrast there were many single professionals such as Zhi Li who were more than happy discussing the subject and their life choices.

What’s most important to you? Getting married or having a career?

“In the future I want to be a teacher. I don’t believe that relationships with men are so solid. I have no faith in relationships and that the right man is out there.”

What if you met someone who you felt was the right person for you unexpectedly and you had to choose between your career and marriage?

At this point Zhi Li sits back and our conversation, falling into an unexpected silence while she ponders on this. A sudden change in her demeanor, she starts to look more thoughtful at this time.

“My parents divorced and this has influenced me. I am not very sure about things. I still need time to consider what I want. Maybe I don’t want to be in a relationship.  I’ve never had a boyfriend. It’s because I’m looking for someone who I trust. Also for Chinese students when we are at primary school, high school, senior school our parents forbid us to have a boyfriend as it detracts from our study.”

What does your Mother think about you being single?

“She says she doesn’t care about it but she has asked a lot of people to try and find someone for me. Actually I know she is very anxious and worried but she doesn’t show it. Some men have already shown some interest but my Mother decided that they weren’t suitable for me.”

Does your Mother give you pressure about getting married?

“My Mother doesn’t but my relatives and friends all do. They keep asking when I’m going to get married. They ask if I have found the right person. Maybe a colleague. Will I find the right person in the future? Will it be this year? Will it be next year? I should find someone soon and so on. Everyone asks me. My peers already have children. There is pressure from everywhere, even on the TV. Some of my colleagues married as soon as they graduated from college. They have had a boyfriend when they were at college and they didn’t want to waste any time. This may have been a secret from their parents. All of my friends from college were in a hurry to get married as soon as they left.

In China if a girl reaches the age of twenty eight they will seldom find the right person. Generally after that it is regarded as too late to get married. Also it is thought that a woman at that age is not as beautiful as before and they won’t be able to get enough money or social status or something like that. You know when a girl is in her early twenties she won’t have any financial ability so she needs to rely on her family to get married. In China parents always give a lot of money for their children to get married. For boys, their parents will buy a house or car or other things. The girl will also receive money from the boy’s family. We call this ‘cai li’. But people get married too early. It’s one of the reasons why people get divorced these days”.

My final question to Zhi Li is whether she would ever like to get married?

“I want to but I dare not to. I am really afraid that I will get a divorce with my husband and this will influence my life. You know it’s common for a man to have a relationship with other woman, especially if he has money. The things that happen around me are always like this. My parents divorced when I was four years old because my Father cheated on my Mother. Although I was very young I still remember that time clearly. I think it is something that has been with me my whole life. Now I belong to my Mother by law so I can never meet my Father, even during the Spring Festival.”

When we parted, Zhi Li was unphased by the interview and returned to the work. Rolling her sleeves up it was merely business as usual. I wish her well on her journey and am sure that her determination will lead her to the success that she deserves.