Langmusi: Part one of three. Please go >here< for Part 2

A few hours south of Xiahe you will find Langmusi. Though this is also a thoroughly Tibetan town there’s still a Hui Muslim and Han Chinese influence in the form of hotels, restaurants and shops. I guess being late September it’s really quiet though the occasional aging tractor clanking over the cobbled main street does break the ambience somewhat. Discharging dirty black smoke everywhere and overloaded with hay, the old farm machines are a sure reminder that this is definitely one of those ‘out there’ places. 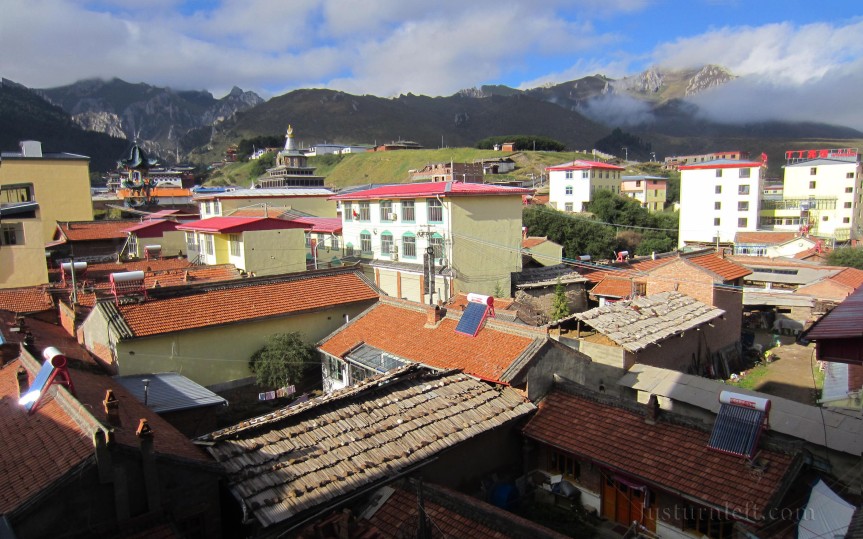 What’s really interesting about Langmusi, is that the river denotes the border between the Sichuan and Gansu provinces therefore splitting the town right down the middle.

This means that there are two primary schools, one on each side and the kids go to different junior and senior schools. They use different electricity, different water, they have two different police stations and hospitals. Amazing hey?

There are also two monasteries complete with their surrounding communities. In the northern Sichuan side is the Sertri Gompa Monastery that slowly works its way up the side of a hill overlooking the town. To the south is the Kirti Gompa which occupies a river valley all the way up to the Namo Gorge. Honestly, if you’re ever in China and you can’t make it to Tibet, then definitely try and make it to Langmusi.

So on the first day, the Serti Gompa is at the top of the list as I really want to find the Sky Burial site. This is where the dead are cut up and fed to the vultures, their remains carried away into the sky and into the universe.

Nearing the burial site, to be honest I haven’t given it much thought as to what it’ll be like up there. Some playful kids take me up to there, but unnervingly won’t go the last kilometre, all of them looking decidedly spooked. As they leave, their absence shepherds a distinct feeling of self-consciousness which descends as noticeably as the darkened slate grey sky. Only the strong wind banging into my ears and the first few drops of rain snap me out of it.

In the fold of a steep incline a great mass of different coloured prayer flags snapping and rippling in the current reveals itself. This must be it. Then, to the left I spot the wheelchair. Some fellow travellers said that that’s the place where they perform the ritual though as I move over to take a look, the wind strangely drops. One could easily say that it’s just the imagination playing tricks but up here anything is possible.

The wheelchair is actually nothing more than a burnt out frame that sits tilted to one side in a circular fire pit. There is a large area nearby with two concave stone and wooden chopping blocks and small pools of water collected at their centres. Two old boxes lie open in the mud filled with well-worn knives and axes. This must surely be the place where they dismember the bodies and as the penny drops, I notice that the mud has transformed into a pink grey matter. An accompanying stench of purification takes me by the back of the throat and I instinctively make a grab for the cough sweets in my front pocket. Beyond the cutting area is a pile of a hundreds of bones supported by a single spine. Jaw bones, legs, ribs, an arm hangs out of the pile. A face looks up at me from the grass. Its eyes and skin are missing but the hair remains. A freshly picked skull lies to one side, fresh, pink and waxy; I have never seen the likes of this before. At an angle down the side of the hill lies a twisted torso. Skin and muscle remain hanging between the bones, solidified brown across its broken framework.

Without a second thought, I push my nausea to one side and pull out my camera and start to snap away. It’s an instinctive reaction fuelled by justification. I won’t get another chance and besides, the people I met yesterday had photos so what the heck.

The camcorder comes out next and I film at least five full minutes of the whole place before calling it a day. Some Chinese folk come up, wrapped up in their outdoor gear though they really look spooked and only take a couple of shots with their phones before vacating the premises sharpish.

Left to my own devices, as I slowly work my way down the track an overwhelming feeling of regret and fear quake through me slowing me to a snail’s pace. Mate, you shouldn’t have done that. That is some serious shit you’ve just done.

Wrestling with the whole thing I stop in my tracks. You total fucking arsehole!

As fast as I can I turn around, double-time it back up to the site and apologize holding up both cameras then delete the material. Not good enough!

I mean, what was I going to do with it anyway? Respect for the dead aside, what would the consequences of posting photos and video footage of a sacred Tibetan burial site on social media be? Not good that’s for sure. You just don’t do that and that’s all there is too it!

In an old abandoned house on the way back I cry in shame at my actions. The need to grab that impressive shot had cloaked my sensibility to the point of sub-human.

Making for the nearest temple I seek forgiveness in prayer though when I arrive the big doors are firmly locked with chain and padlock. The weather is grim, my boots now heavy with water. To another and another, each place is closed.

It’s like the Universe has deemed me unfit to enter.