The distinct shrill of the warning siren from the railway crossing resonates throughout the area so dropping a couple of gears I stand on the pedals and cycle as fast as possible in a bid to get there before the gates go down. It’s a warm early summer’s evening and the red LED rope lights draped across the length of the barriers are visible right from the end of Shuangqing Lu as they are lowered. Damn, I’m not going to make it tonight! 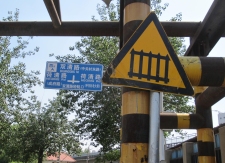 It’s always a sight to behold when a train’s coming. Wudaokou is central to Tsinghua and many other important universities so it’s a really busy area moreso due to the thousands of students who use bikes to get around. The crossing is located next to a double crossroads so the traffic rapidly tails back in all directions on either side.

Arriving at the crossing the lunacy has already started and I can feel it’s going to be one of those crazy nights.  A motorcyclist has tried to get under the barrier at the last second as it came down and dropped the bike. His passenger limps off and stands to one side while he awkwardly tries to pick his machine up off the tarmac.

Passer-by. Please pay attention to other vehicles. The train is coming…

In a massive act of queue jumping a guy drives his white Hyundai up the now empty oncoming lane, parking at the head of the main line. Showing his intent, he’s left it at an angle ready to cut up the car next to him as soon as the barrier’s lifted. 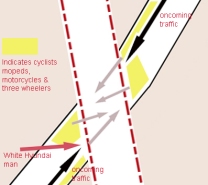 As per usual the number of bikes, mopeds and motorbikes builds up forming a large crowd around the cars, filling both lanes. Tonight there are a number of fast food delivery riders all in black and yellow with matching top boxes forming a line up front closest to the barrier. There are also a number of three wheeled machines that are built to carry heavier loads such as sacks of rice and whatnot as well as countless machines with pillion. With nothing to do for the next few minutes inevitably lots of people start smoking and the distinctive toxic secondary aroma quickly finds its way under my nose along with an ample dose of exhaust fumes, yeeeech!

The distant rumble of the train beings proceedings to the next phase. One of the guards in green uniform signals down the track with a heavy duty flashlight to the driver while the others stand on either side to ensure no one tries to do anything stupid. As the train thunders past, the pack inches forward as close to the barrier as possible in expectation creating a singular moment of dynamic tension. The chap on a motorbike next door eyes me up and down as I prepare to go. Dropping his bike into first gear he opens the clutch just enough for the bike to move slightly forward so the front end is now already under the barrier. A guy wearing a suit to my left on a flash new black Yamaha throws his cigarette down on the floor like a gangster in order to concentrate on the task ahead.

There is only one advantage of being first off the block but it’s well worth it. That is you won’t get tangled up in the chaos that occurs as both waves of traffic meet. You have to have your strategy nailed down before the starting gun goes off. I know I can beat Hyundai man but not the motorcyclists either side of me so I plan let the guy to my right go ahead and then cut in front of Hyundai man and use him as a rear guard shield.

And they’re off! The train passes and the motorcyclist to my right is away like a rocket as soon as there’s clearance under the barrier. Obviously he hasn’t done this before though. Hitting the first track way too fast, his arse leaves the seat and he clings onto his machine like he’s riding a bucking bronco. Regaining some semblance of control, he then encounters the oncoming wave of traffic and is forced to slam on the brakes sliding sideways. Nice one on that mate!

As per usual I’m off to a good start and Mr Hyundai is surrounded by bikes weaving all over the place, impairing his cutting in manoeuvre. Slow down at the tracks and be as mindful as possible. They bisect the road diagonally so you have to turn into them to avoid getting your wheels jammed in. Two girls on a moped go into the tracks all wrong and the one on the back drops her ice cream all over her lap before it’s deposited on the tarmac. On the other side, a three wheeler loses a clear blue cylindrical five gallon water container. It hits the floor with a bang, bouncing once into the path of a number of bikes sending them off in different directions.

It always amazes me how few people you see on the deck along with their bike in Beijing all considering. Really there should be people sprawled all over the tracks. 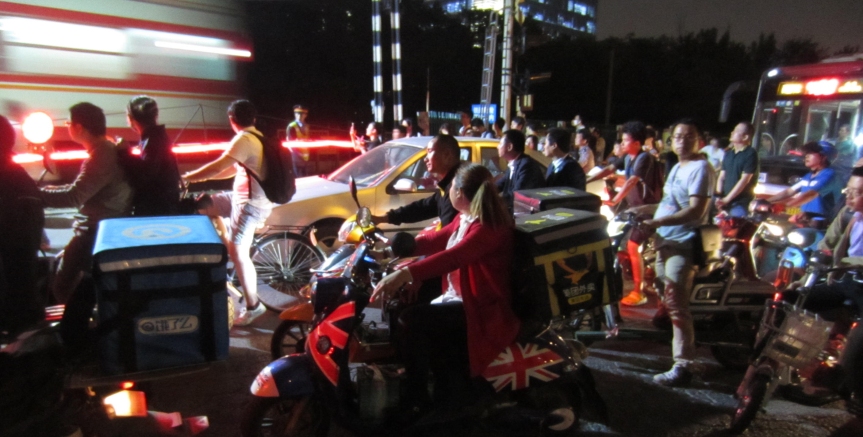